So here in the UK were are about to be treated to a double bank holiday in celebration of HRH The Queen's 70th Platinum Jubilee. How exciting! I do love a bit of pomp and ceremony! I am looking forward to following the celebrations as they unfold 🎉.

Whilst baking of course. Because I basically never stop baking!

To keep to our red, white and blue theme, these are actually white cake cupcakes, they are made with egg whites only, rather than whole eggs. The addition of sour cream and milk give these red, white blue cupcakes a soft, muffin-like texture with a vanilla flavour.

Beat softened butter and sugar until light and airy.

Beat egg whites until frothy and standing in peaks.

Mix together sour cream, milk and vanilla extract. Gradually beat in on a low setting, alternately with flour.

Adding a quarter at a time, beat the egg whites into the cake batter mixture on a low setting.

Give the mixture a beat on a medium-high for 10 seconds.

Add heaped teaspoonfuls of each colour to cake cases, ensuring they are all filled equally.

Bake for 20-25 minutes, until golden and the cakes spring back when touched. Leave to cool.

See ”Top Tips” below for an alternative method if you do not have a Wilton Colour Swirl.

Cut a hole in the top of each cupcake, a Cake Corer is great for this. Fill with jam. Then pipe stars of buttercream onto each cake.

Hint: use weighing scales to ensure that your cake batter and buttercream are split into 3 equal amounts, simply weigh out the same amounts for each one.

If you don't have the exact ingredients listed then no problem, the following can be used instead:

Why use gel food colouring?

Because we want to achieve really strong colours for our Platinum Jubilee red, white and blue cupcakes, we need to use a food colour that is not water-based and will not therefore add extra moisture, such as a gel or paste food colouring.

What are white cakes?

White cake is made from just egg whites, not the full egg which gives a cake batter perfect for colouring. The egg whites are beaten first, to add plenty of air to the batter and ensure the cakes rise.

Vegan - to make these into vegan cupcakes, simply follow my Very Best Vegan Coffee and Walnut Cupcakes recipe, however omit the coffee, boiling water and cinnamon, replace the brown sugar with caster sugar, and increase the vanilla extract to 1 tablespoon.

Platinum Jubilee red white and blue cupcakes are iced with buttercream and so will keep for 2-3 days at room temperature or up to a week if refrigerated.

These cupcakes can be frozen pre-iced and should be eaten within 3 months.

If you do not have Wilton 3 colour coupler you can still easily pipe 3 colours at once.
Simply take a piece of cling film (plastic wrap) and lay it out.
Take 3 sandwich bags and add your coloured buttercream to each one, so that you have one red, one white and one blue.
Cut a hole in the corner of each bag and then pipe a strip of each one, about 15cm long, next to each other.
Roll the clingfilm over the buttercream strips to form a sausage and then place in a piping back pre-fitted with a large star nozzle.

Watch this video for guidance.

Light and fluffy Biscoff cupcakes, with a secret Biscoff surprise hiding inside, a crown of soft Biscoff frosting on top and a sprinkle of Biscoff biscuit crumb to decorate.

Light and fluffy vegan coffee cupcakes dotted with nuggets of soft chopped walnuts and topped with smooth dairy-free vegan coffee icing, with a sprinkling of walnut pieces. There is a reason why I confidently name them the best. 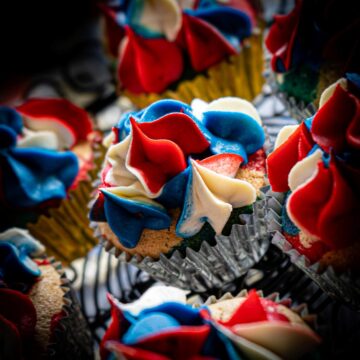 Both Jubilee Cakes and Buttercream

We use cookies on our website to give you the most relevant experience by remembering your preferences and repeat visits. By clicking “Accept”, you consent to the use of ALL the cookies.
Do not sell my personal information.
Cookie SettingsAccept
Manage consent

This website uses cookies to improve your experience while you navigate through the website. Out of these, the cookies that are categorized as necessary are stored on your browser as they are essential for the working of basic functionalities of the website. We also use third-party cookies that help us analyze and understand how you use this website. These cookies will be stored in your browser only with your consent. You also have the option to opt-out of these cookies. But opting out of some of these cookies may affect your browsing experience.
Necessary Always Enabled
Necessary cookies are absolutely essential for the website to function properly. These cookies ensure basic functionalities and security features of the website, anonymously.
Functional
Functional cookies help to perform certain functionalities like sharing the content of the website on social media platforms, collect feedbacks, and other third-party features.
Performance
Performance cookies are used to understand and analyze the key performance indexes of the website which helps in delivering a better user experience for the visitors.
Analytics
Analytical cookies are used to understand how visitors interact with the website. These cookies help provide information on metrics the number of visitors, bounce rate, traffic source, etc.
Advertisement
Advertisement cookies are used to provide visitors with relevant ads and marketing campaigns. These cookies track visitors across websites and collect information to provide customized ads.
Others
Other uncategorized cookies are those that are being analyzed and have not been classified into a category as yet.
SAVE & ACCEPT