Published: Mar 27, 2021 · Modified: Nov 6, 2021 by Ella's Better Bakes · This post may contain affiliate links and I earn from any qualifying purchases. ·Leave a Comment

This recipe is a new take on the traditional English puddings of jam roly poly and spotted dick. It brings both together in one delicious pudding, and enhances them with a citrus zesty twist throughout and a spicy citrus preserve filling.

Believe me, when I say, you will not regret giving this one a go. That is if you are a fan of suet puddings. Which I am. They are ground into our English heritage after all are they not?!?

Just picture for a moment a bowl of steaming hot jam roly-poly or spotted dick covered in lashings of soft pale yellow Proper English Vanilla Custard. None of this supermarket-bought-calls-itself-custard malarkey. Trust me, there is nothing better. And this recipe takes the whole show to another level entirely. It combines both jam roly-poly and spotted dick in one, with a zingy orange and lemon zest throughout and a delicious citrus preserve filling. Divine.

This mash-up of recipes was created by mom one Sunday to follow one of her supremely almightily good Sunday lunches. And I have since brazenly stolen it for the blog. It really is a game changer. I had no choice but to share it with you lovely people. It would be totally selfish not to enlighten the world to yet another of this amazing woman's strokes of genius.

So how can I describe Citrus jam roly-poly spotted dick pudding just so you really understand the levels of perfection we are talking about here??

Vegetable suet : or you can use grated Trex or Crisco if you can't get hold of veg suet. Beef suet isn't really ideal for baking as it isn't light enough. Perfect for meat suet puds though.

Why does suet work in puddings? Well as ever with baking it is all in the science. Suet has a higher melting point than butter. It sits back and lets the batter do its thing in the oven. Once the batter starts to set, it then steps in and begins a slow luxurious melt. This is what gives the end suet pudding its lovely light texture.

Raisins: I prefer raisins in this pudding. They are the baby bear of the dried fruit three in my book, sultanas being too soft and currants being too hard. If you do use currants I'd recommend soaking them first so that they bloom as they are baked. Sultanas will work fine. I just prefer raisins, that's how I roll .... as it were.

Good quality preserve: feel free to use whatever you want here BUT I highly recommend

" rel="nofollow">St Dalfour Orange and Ginger preserve. You can also buy this from any supermarket (in the UK anyway). And you'll still have enough left to spread on your toast the next day. Win win.

Suet puddings need to be steamed. With this one, we steam it in the oven for an hour over a deep roasting tin ¾ filled with boiling water. The pudding has to be wrapped properly however to ensure it steams and to allow it to expand. So, take a piece of greaseproof paper measuring 50cm x 37.5cm and take a piece of foil measuring 55cm x 37.5cm. Lay them both out separately ready.

To make this the citrus jam roly poly spotted dick combo, place all of your dried ingredients into a large bowl and give them a good mix. Then mix your vanilla essence into your milk and add the lot to the dry ingredients along with your zests.

Flour your worksurface fairly liberally, the dough will be quite wet and will stick easily otherwise (I speak from experience!). Tip the mixture out onto the floured work surface, then give it about 10 kneads to bring it together. Try not to knead more that than as it can make the dough tough.

Now you are ready to roll out your dough into a rectangle measuring approximately 22cm x 32cm. Before you start rolling double check that you still have flour underneath, so the dough doesn't stick as you roll. Not good. This happened the first time I made this roly poly spotted dick pud and the air in the kitchen was a dark shade of blue.

Taking your preserve, spread it over the dough rectangle evenly. Leave a gap around the sides of 1.5cm, so that the jam doesn't spill out when baking.

Then it's the fun rolly roly poly up bit.

Starting at the short end, gently fold over the edge onto itself and then roll the dough up. Don't worry if some jam spills out when you get to the end, just gently squidge it back in under the dough. Press the dough down gently across the seam to seal it. Gently squeeze the ends to seal those too.

Next, you need to wrap it up into a cracker shape. Facing the longest side of the roly poly, hold the two ends of the greaseproof paper up above it. Then fold them together to the depth of about 1.5 inches. Repeat this pleat until you get to about 1 inch away from the roly poly, so that you leave some room for the pudding to expand. Holding the pleat with one hand, take the end of the "cracker", scrunch it together and secure it with kitchen string. Do the same with the other end. The roly poly cracker should hold enough space for it to grow as it bakes.

Repeat the above with your piece of foil.

Fill your roasting tin ¾ full with just boiled water. Pop a baking rack above it, or you can use a cooling rack if it is oven safe, just so that it balances on the top but doesn't touch the water. Then pop your roly poly on top of the rack and bake for an hour or until it feels solid to touch. Serve with Proper English vanilla custard.

As ever please do rate my recipe, and I'd love to hear how you got on if you made this. There is a contact sheet below. Happy baking! 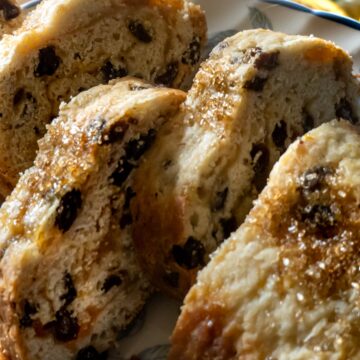 This recipe is a new take on the traditional English puddings of jam roly poly and spotted dick. It brings both together in one delicious pudding, and enhances them with a citrus zesty twist throughout and a spicy citrus preserve filling
No ratings yet
Print Pin CLICK STARS to Rate this Recipe
Prep Time: 15 minutes
Cook Time: 1 hour
Total Time: 1 hour 15 minutes
Servings: 10 slices
Calories:
Author: Karen
Tried this recipe?Follow at @ellasbetterbakes or tag #ellasbetterbakes!
TOGGLE TO ALTER SERVINGS (metric only) 10 slices
Prevent your screen from going dark

We use cookies to ensure that we give you the best experience on our website. If you continue to use this site we will assume that you are happy with this.OkDeclinePrivacy Policy