This pretty Earl Grey and Lavender Cake is subtly flavoured with the complimentary floral flavours of culinary lavender and Earl Grey tea leaves. This is a soft, moist cake topped with a delicious lavender flavoured two-tone buttercream frosting. A beautiful cake to serve for afternoon tea.

You might well be sceptical about a cake flavoured with Earl Grey tea and lavender and assume the flavour will not be unlike potpourri. Quite honestly so was I as it does, after all, sound a little strange. However, my husband and I are life-long fans of Parma Violets (we like to feed our inner child) and I really wanted to create a cake with a similar flavour combination.

What does Earl Grey and Lavender Cake taste like?

Fragrant, but subtly so ✔️

Floral, but subtly so ✔️

Soft and moist in texture ✔️

What is culinary lavender?

Culinary lavender is cultivated specifically for cooking. It is sweeter and less bitter than normal lavender. It also contains less oil than the varieties used for soap and perfume.

It also has a more genuine flavour than lavender essence, which is quite strong and can be a little artificial in flavour. 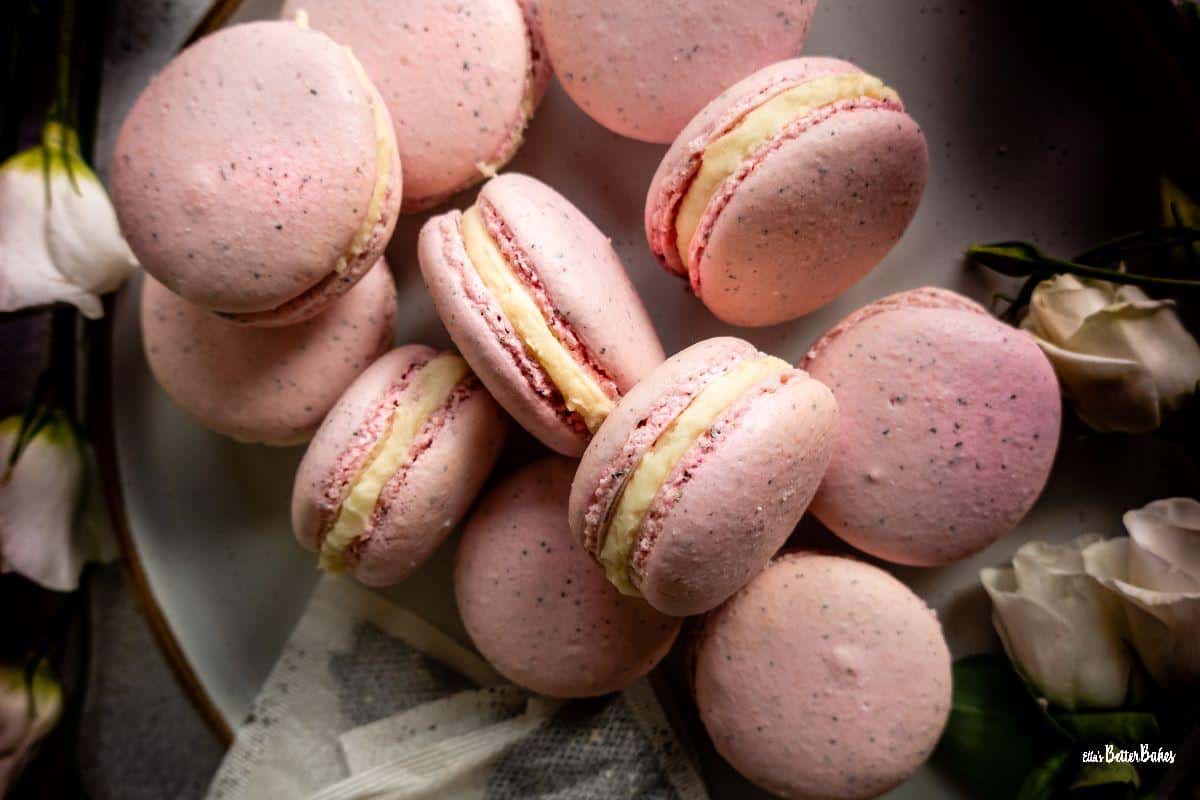 Love the flavour of Earl Grey tea? Why not give these beautiful Earl Grey Macarons a try.

Earl Grey teabags: the contents are ground up with the culinary lavender and added to the cake batter.

The lavender and tea must be ground as finely as possible so that they disappear when baked.

Plain flour: or all-purpose flour if you are in the US.

Granulated sugar: or you can substitute with caster sugar.

Baking powder and Bicarbonate of Soda (baking soda): for leavening, the bicarb reacts with the yoghurt to ensure the cake rises.

Natural Greek yoghurt: to ensure a soft and moist cake.

Eggs: to bind the cake together.

Fine salt: helps to bring out flavours within the cake.

Picture 1: grind together your culinary lavender and the contents of your Earl Grey teabags.

Sift together your flour, baking powder, bicarbonate of soda (baking soda) and salt.

Picture 2: whisk together your eggs and sugar until frothy.

Picture 3: add your yoghurt, oil and vanilla extract and whisk in.

Picture 4: mix in your flour and ground culinary lavender and tea leaves until just combined, do this on a low setting to avoid overmixing and adding too much air. Plenty of air has already been added during the whisking stages. Too much air will result in holes throughout the baked cakes.

Picture 6: bake until golden and a skewer inserted comes out clean. The cakes will also be just coming away from the sides of the tins when ready.

Picture 7: prepare all of your ingredients and sift your icing sugar. Sifted the icing sugar because it results in a smoother buttercream.

Picture 9: beat your butter to ensure it is soft enough, it should not be clumping around the beater in lumps when ready. Then, gradually add half of your sifted icing sugar, beat in your cooled, infused lavender milk snd then add the rest of your icing sugar.

Picture 10: split the buttercream into two bowls and colour one with some purple gel food colouring.

Picture 11: add a 1M Wilton large star tip to your piping bag and fill one side with purple buttercream and one side with uncoloured buttercream, we do this because we want a two-tone effect when we are icing. See this video for guidance on how to do this.

Then pipe star shapes around the outside of the first tier by holding the bag horizontally above and squeezing gently.

Picture 12: pipe a swirl around the centre to fill the tier, this does not need to be overly neat as it will not be seen (as you can probably tell by mine!).

Picture 13: pipe stars over the top and pipe smaller stars into any spaces left until the top of the cake is completely covered.

For a 3 tier cake add another third of the ingredients again.

You can omit either lavender or Earl Grey tea and the cake will still be lovely.

Decorating with Parma Violets is another option or try grinding them down and sprinkling over the top.

As this cake is full of lavender buttercream it will keep at room temperature for just a couple of days. Refrigerated it will keep for up to 5 days.

If you want to freeze this Lavender and Earl Grey Cake, wrap each layer in cling film (plastic wrap) first to protect them whilst in the freezer and make the buttercream when you want to use it.

What can you bake with culinary lavender?

Culinary lavender is from the same herb family as thyme, rosemary, oregano, basil and sage. It pairs particularly well with lamb and rosemary. In baking, lavender is beautiful when used in scones.

See below for recipes with similar flavourings

Earl Grey Macarons
Fragrantly flavoured Earl Grey Macarons and really in a league of their own. These delightful macarons are filled with a complimentary softened maple syrup buttercream.
Take Me To The Recipe!

Persian love cake with rosewater
A delicate, dreamy cake infused with the subtle flavours of cardamom, rose water and lemon.
Take Me To The Recipe! 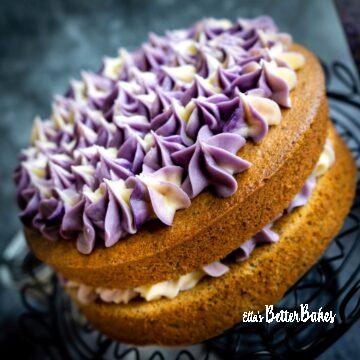