After Eights, for those that don't know, are essentially a layer of thin mint fondant encased in a layer of thin dark chocolate. When I was a child they were quite a treat, and not nearly as cheap as they are now. Perhaps that is why I still adore them and they always feature on our table at Christmas.

But, I thought, why not go a step further? Why not add them to a lovely, gooey, fudgy brownie? It can surely only be a good thing!

By adding a layer of After Eights mint thins we introduce a layer of mint but still keep the richness of the chocolate brownie on either side. So we have different levels of flavour and different textures in one gloriously soft, rich brownie.

These After 8 brownies are truly one of my favourite bakes to date and I really hope that you lovely people enjoy them too.

For another sweet treat Biscoff recipe my Biscoff Fudge

Why make these After Eight Brownies?

A layer of After 8s inside ✔️

Unsalted butter: yep we wang in a whole block with not a thought to the calories. Adding a block of butter ensures our brownies are moist, tender and aerated so that they rise a little.

Dark chocolate: always use good dark chocolate, it makes such a difference to the quality of your brownies. It doesn't have to be expensive, I used one block of supermarket branded dark chocolate and topped it up with Dr Oetker 72% dark chocolate. Just be sure your chocolate is at least 70% cocoa solids for best results.

Plain flour: brings some structure to our After Eight Brownies, without flour they would be overly gooey.

Cocoa powder: again, try to use a good brand if you can to ensure your brownies have a real chocolatey richness.

Baking powder: to help our brownies rise a little.

Eggs: our eggs are beaten before we add them to our brownie batter, so as to beat some air in beforehand and help the brownies to rise. They also give our brownies a soft texture and ensure the dry ingredients combine.

After Eights: yep a whole box is used! They are not called After 8 Brownies for nothing!

Heat your oven and line your baking tray with greaseproof (parchment) paper.

Melt your butter in a bain-marie and then add your chocolate and stir until melted.

Stir in your sugar and leave to cool. The mixture must be cool before you add your eggs, otherwise, it will simply cook them!

Sift your flour, cocoa and baking powder and beat your eggs.

Fold in your flour mixture and then your eggs.

Add half of your brownie mixture to your tin, cover with a layer of After Eights.

Cover with the remainder of your brownie batter.

Pop a few After Eights onto the top and sprinkle over your remaining dark chocolate chunks.

Bake until a skewer comes out only with a few cakey, fudgy bits stuck to it.

Leave to cool completely in your tin and then cut into small squares.

You can use this recipe for plain brownies, just leave out the After Eights, everything else is the same.

Or create fruit and nut boozy brownies. Soak 75 grams of raisins in a tablespoon of brandy for at least 30 minutes and then add them, along with 60 grams of chopped nuts, to your brownies batter after you've mixed in your flour.

You can add still add After Eights as per the recipe below or omit them altogether.

Store After 8 Brownies in an airtight container at room temperature for up to 5 days.

You can freeze your brownies, once totally cooled. Wrap the whole lot, uncut, in two layers of foil and then a layer of clingfilm, ensuring all layers are nice and airtight. Cut when fully defrosted.

Or, to freeze your brownies individually, cut them up, place them in an airtight container and place a piece of greaseproof (parchment) paper in between.

Can you put brownies back in the oven?

You may find that once you've taken your brownies out of your oven you realise they are a bit too gooey inside and could do with baking for a bit longer. Simply reheat your oven and pop them back in. This is fine to do even if your brownies had been cooling for a few hours.

Can you save overbaked brownies?

If you want to revert overbaked brownies back to their gooey finery simply prick the brownies all over and then pour over a chocolate syrup to replenish the moisture content, here is a recipe you might want to try. You can, if you wish, go a step further and cover with a chocolate ganache as per the one used in my Chocolate Orange Cake recipe.

Biscoff Fudge
This lovely soft Biscoff fudge has caramel undertones and is subtly flavoured with Biscoff throughout. The soft fudge texture is enhanced with the gentle crunch of a Biscoff biscuit topping.
Take Me To The Recipe! 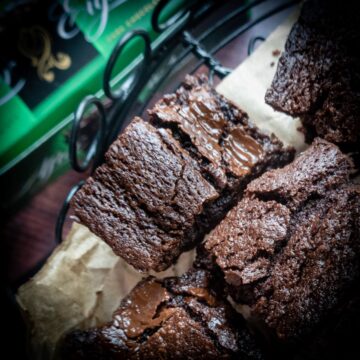